THE HENRY DUNSTER SOCIETY
ABOUT HENRY DUNSTER
Henry Dunster was born near Bury, Lancashire, in 1609 and attended the Bury School, now Bury Grammar School. He went up to Magdalene College, Cambridge, and after graduation became the Curate of Bury Parish Church, a living in the patronage of the Earl of Derby. The pluralist Rector of Bury attended the earl elsewhere in Lancashire. Dunster also became the third Master of Bury School, originally founded about 1570. Dunster left his posts in Bury in the summer of 1640 when, like many other Puritans dissatisfied with developments in both church and state and probably in anticipation of a Civil War, Dunster emigrated to Massachusetts.  No portrait of Dunster survives, but we have a record of his signature.

Soon after his arrival, Dunster was asked and agreed to become the first President of Harvard College, now Harvard University. By all accounts, Dunster rescued a fledgling institution on the verge of closing its doors and in all respects laid the groundwork for making Harvard the leading institution of higher education in North America, and eventually in the world. Among his other notable achievements, Dunster helped craft the Massachusetts school system, set up the first printing press, which evolved into Harvard University Press, and drafted the 1650 Charter for the President and Fellows of Harvard College (the Harvard Corporation), the first corporation chartered in the New World. Dunster died in 1659 and his grave is marked in the Old Burying Ground in Cambridge, MA.

Two recent papers explore aspects of Dunster's life and work: "Digging Up Dunster: The Vital Link between Bury Grammar School, Harvard University, and Higher Education in America" and "Choosing the First President of Harvard: Henry Dunster and the Fallows Thesis."

Remarkably, given his contributions and achievements, Dunster was not armigerous during his lifetime. The "Dunster arms" on a window of Magdalene College are those of another family and the different arms on Dunster House at Harvard were created in the mid-1930s.  Although few documents survive to explain how Dunster thought of himself, he did use a phrase in one letter, ego enim Lancastrensis sum, suggesting that he was a modest, hard-working, Lancashire lad, proud of his northern English origins and of his Lancashire accent.

A recent registration of arms in memoriam for Dunster symbolizes his emigration to the New World and his Lancastrian roots, Azure a galleon under sail Argent St George's Cross flying on her masts proper on a chief Argent two roses Gules barbed and seeded proper. This is an initiative of the Henry Dunster Society. 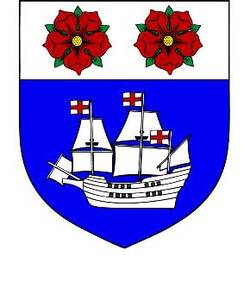 The stained glass window in the hall of Magdalene College, Cambridge falsely attributed to Dunster.  During his lifetime Dunster was not armigerous.  The College of Heralds attributes the arms shown at Magdalene to a different Dunster family, from the south-west of England.